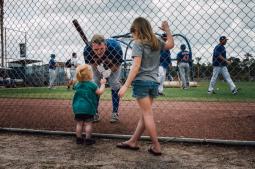 This article was about the story of Kyle Johnson who is the starting left fielder for the Triple-A Las Vegas 51s. In this article it explains what Kyle fought for and he did what agents have been advising minor leaguers not to do, at least not if they want anything to do with the bigs ever again, but Kyle had just become the first active minor leaguer to publicly declare his part in an ongoing class-action lawsuit against Major League Baseball over unfair wages and unjust labor practices, stated in the article. In five years as a minor leaguer, including his time in Triple-A, Kyle Johnson has never been paid more than $11,500 a season by a baseball team. This article states that his first paycheck for two weeks of work was about $420 and that back home, old college classmates were starting their careers in finance, pulling down $60,000 a year. By the end of his first season as a pro ballplayer, Kyle had made maybe $2,500. Kyle did the math. His salary worked out to around $35 per game, maybe 12 bucks an hour. He ended up getting released and not playing anymore because they wouldn’t give him anymore money and he couldn’t provide for his family.